Sheldon Webster: The Accounting of a Life Well-Lived. 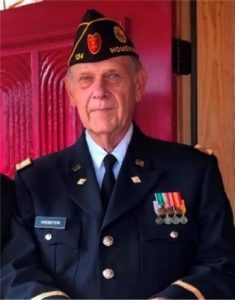 It is with great sadness that the Borland Benefield family announces the passing of one-time Chairman and major shareholder Sheldon Webster. He passed on the 5th of April 2022.

Sheldon’s exceptionally adventurous life began on August 6, 1944, in Norton, Virginia. His father, Burt Webster, was the Noxubee Wildlife Refuge manager, and his mother, Marjorie Stair, was a piano teacher in a home without electricity in rural Mississippi. While Burt Webster was a Navy corpsman in the Pacific with the 3rd Marines, Sheldon spent the first two years of his life in the home of his grandfather. He later inherited his Louisville & Northwester Railroad Elgin watch, sparking a lifelong love for the rails in young Sheldon.

Mr. Webster started his accounting career in Birmingham, Alabama, in 1969 with Haskins & Sells, one of the Big Eight firms. Just four years later, with no clients and no money, he founded his own firm, Webster & Associates, on February 13, 1973. He grew his firm until 1977, when he merged with Borland, Benefield & Crawford, changing the firm’s name to Borland, Benefield, Crawford & Webster. Over time, the firm pared its name down to Borland Benefield. Founded in 1922, the Firm is one of Alabama’s oldest accounting firms.

Sheldon retired from Borland Benefield in 2010 as Chairman and major shareholder. Throughout his career, he was a member of BKR International, an international accounting and consulting affiliation headquartered in New York with offices in 80 countries and 320 cities. He was elected Chairman of BKR in 2002.

Sheldon Webster was no typical CPA. Friends and associates considered him to be an adrenaline junkie who, throughout his lifetime, climbed eight major mountains, traveled the seven continents, and sailed the world’s oceans. He visited 150 countries, earning membership in the Travelers’ Century Club. He traveled to all 50 of the United States and visited most major cities in the world.

While on assignment writing House of Deception, Webster stared down the barrel of AK-47s in Columbia, Guatemala, and Cambodia. When asked why he took such risks, he replied, “I never write about a place unless I get into the lives and minds of the people so I can write truly.”

The 1966 Mississippi State University graduate was commissioned in the Army and rose to the rank of captain. He was stationed on the East German border as a Cold War warrior. In 2002 he attended the United States Army War College National Defense Conference at Carlisle Barracks, Pennsylvania, as a civilian counsel to the Army. Sheldon mentioned that one of his few regrets in life was not becoming an Eagle Scout and serving our country in the Vietnam War.

Sheldon, known as ‘Willie Wild,’ became a pulp-wood cutter at age 13 on Burton Place, his writer’s retreat in Oktoc, Mississippi. It was here that he did some of his most prolific writing. His avocation was hunting wild turkey and ducks and entertaining guests as an avid Mississippi State fan.

Over the course of his adventurous life, Sheldon experienced several close calls with death. After surviving a near-fatal storm on Alaska’s Mt. McKinley in 1997, he escaped death again when his bush plane stalled on takeoff on the Kahiltna Glacier. He said on his 77th birthday, “I am fortunate having escaped the Grim Reaper to live this long and happy life.”

Honoring Those Who Served 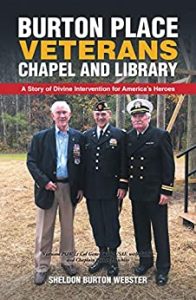 Webster served as the treasurer of the National Whitetail Warrior Project, Inc., whose clients are 50% disabled Veterans awarded Purple Hearts. He took great pride in his membership in the Society of the Revolution and his lineage to Caleb Webster, a Continental Army soldier and grandson of Secretary of State Daniel Webster.

With divine intervention, Sheldon began construction in 2019 on Burton Place Veterans Chapel and Library, a spiritual and educational retreat for Gold Star families and veterans. Nucor Steel donated the Gold Star Monument honoring “those who gave and those who gave all in service of their nation.” Bishop Presley Hutchins said, “Sheldon’s vision was a revelation that spread across Mississippi and beyond.”

Webster served on Alabama Writer’s Forum and assisted others in writing their memoirs, as he did in 2013: Memoirs of a Writer. The author anonymously donated royalties to the International Literacy Foundation. “If people are taught to read, they can educate themselves and escape exploitation,” he was quoted by a New York reporter reviewing his Wall Street novel, Voyage of the Encounter.

Sheldon became a fan of trains in his youth, and that love stayed with him his entire life. He rode the world’s luxury trains of Europe, India, and Australia as well as trains from hell in Africa, China, and the Middle East, and Central Asia. He was a frequent Amtrak passenger and proposed to his wife, Susan, on the Venice Simplon-Orient Express.

In his yet-to-be-published book, Tales from the World’s Rails, he included his journey on the Trans-Mongolian Express from St. Petersburg to Shanghai, China. He again escaped the Grim Reaper after missing the Bangkok to Singapore Express, whose 200 passengers perished in a typhoon on November 24, 1988.

While researching the Golden Triangle opium region in Burma, Webster became stranded when his up-train from Yangon to Mandalay was delayed by a train derailment. In 2010 he missed his Tanzar/Zambezi train connection in Lusaka, Zambia. He recalled, “This was the most terrifying event in my life: crossing the Zambezi River Gorge Bridge on the Zimbabwe/Zambia border in the pitch-black night in a time of civil strife.”

While recruiting members for BKR, Mr. Webster visited narc-ravaged Columbia and made reservations on December 20, 1995, for American Airlines Flight 965 from Miami to Cali, Columbia. At the last minute, he changed his reservations, and Flight 965 crashed into a Columbian mountain killing 159 passengers and crew members with four survivors. This is yet another example of Webster’s near encounter with the Grim Reaper.

Sheldon Webster was a Methodist who attended church every Sunday. He believed in predestination, whereby the Almighty determines one’s time on earth. “Life is a series of choices; some good, many bad, with a lot of luck, come into play. Some people take advantage of luck while most squander it for fear of taking a risk.”

Webster was a Paul Harris Fellow Rotarian and member of the American Legion. He was a founder of the Alabama Chapter of the National Wild Turkey Federation.

He is survived by his wife of 35 years, Susan, a son, Anthony Parrish Webster, twin granddaughters, Caroline and Emily Webster, three step-children and four step-grandchildren, and a brother, Stuart Webster of Vicksburg, ex-wife Debby, and four nephews.

Mr. Burton will be put to rest atop Mount Burton. Journalist Robert Dowling wrote of his mountain climbing partner, “You’ll often hear someone say they love a place so much they want to be buried there. What is more fitting than to lodge your soul in the land that created you and is placed in trust for future generations to enjoy.”

The family requests with gratitude that memorials honoring the life of Mr. Webster be directed to Burton Place, LLC, located at 1000 John Logan Road, Starkville, Mississippi, 39759.

The Inflation Reduction Act targets a wide range of issues, including many cost-saving changes to life-saving medications. Read our article to see how it helps you.

END_OF_DOCUMENT_TOKEN_TO_BE_REPLACED

HB256, also known as the Municipal Audit Clarification Act, details how mayors or city managers of a municipality should audit their municipality’s financial expenditures. Are you aware of this new bill’s requirements? Visit our blog for useful information regarding the new requirements.

END_OF_DOCUMENT_TOKEN_TO_BE_REPLACED

The holiday season is a time for hope, and Borland Benefield’s long-time client, the Presbyterian Home for Children has been on a mission of hope for over 150 years. Read our article and learn all about this benevolent organization.